The True Family Celebrated their 50th Anniversary in September of 2015

Fifty years of mindful stewardship of the land and exceptional guest service brings the third generation of the True family to the forefront. Joining the team is Russell’s son Steven and his wife Alice. In keeping with family tradition, you’ll see them all over the ranch, from wrangling and managing staff to serving breakfast cookouts and grilling your steak for dinner. When you visit the ranch, you’ll find you really are a guest in their home.

White Stallion Ranch was originally built in the 1900’s and began as a cattle ranch. The original property was constructed of Mexican adobe brick made of mud and straw. During the renovation, wire and horseshoes were found in the walls. A small area of the original adobe is on display in the dining room, the original building on the ranch.

Homesteaded by David Young in 1936 – 1939, Young became the first deeded owner of the property. Herbert and Vine Bruning purchased the ranch in 1939 to ranch cattle, chickens and turkeys. They changed the name to CB Bar Ranch and it was once home to 30,000 birds. In 1945, Max Zimmerman (a Chicago liquor store owner) bought the ranch and moved West to become part of the 100 strong guest ranch industry in Tucson. Max named the ranch the MZ Bar Ranch and constructed six buildings complete with kitchenettes for guests. These buildings are still standing but several renovations later they no longer resemble the original guest room interiors.

In 1949, Mary Varner purchased the property, continuing to operate it as a Guest Ranch, she also offered long-term rentals to the nearby Marana Army Airfield. 1959 was the year Brew and Marge Towne, of Cape Cod, Massachusetts fulfilled their dream of owning a Guest Ranch. They re-named the ranch White Stallion, even though they wanted to name it The Black Stallion. They quickly realized that “BS Ranch” sported a negative connotation and White Stallion has stood the test of time.

In 1965, Allen and Cynthia True came from Colorado to make the ranch their home, with Russell, just five years old and Michael still in a crib.
The ranch consisted of 17 rooms, 17 horses and 200 acres. The number of Guest Ranches left in the area had dropped to about 30, most were casualties of Tucson’s Urban Sprawl. With an eye toward the future, Allen and Cynthia began purchasing adjacent land as it became available, increasing the ranch to 3,000 acres. Today, the ranch offers 43 rooms and a 5 bedroom Hacienda as guest accommodations.

While maintaining the traditions of the West with many of the original buildings still in use, Russell and Michael have added sunken tennis courts, a movie theater, a new pool and hot tub area with a serenity patio, lighted sport courts a spa area and fitness center. They have established one of the largest privately owned herds of horses in Arizona and a large herd of cattle.

The rest, as they say – is history, today you’ll meet the third generation of Trues – working side by side with their sleeves rolled up, serving guests in the family tradition.

Since the early days as a backdrop in Western feature films and later, as the location for the television series High Chaparral (1968-72) White Stallion Ranch has consistently attracted the attention of Hollywood Producers.
Here’s a list of films shot on location in chronological order:

Russell attended the State of the City Address for Oro Valley as  a board member for the Metropolitan Tucson Convention and Visitors Bureau in 2008.

Solar Path was there with a Solar display, and they offerred the opportunity for the utility sponsored, government funded solar program. After much internal discussion, the Ranch decided that based on the economic uncertainty of the times, they would not join the program.

Subsequently the program became fully subscribed and the opportunity was gone. However, because of the severity and length of the economic decline, several companies dropped out and Solar Path came to us again. An opening was available, so we opted in, creating the largest private solar farm in the Tucson area.

On January the 3rd (2011) construction began and on Tuesday the 22nd of March the first solar panels began to operate.

We have three separate sites where the electricity comes from solar panels into the meters for the ranch; the well, staff area and our main lodge buildings plus west side rooms.

This is the largest amount of solar power that we are allowed to install based on the program.

When last checked, the meter for the main lodge had delivered 5,360 KWH, bought 104 KWH and sold back 7 KWH. The system is designed to power 35% to 40% of the electricity for the ranch, which we find a very exciting prospect indeed. 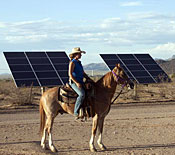